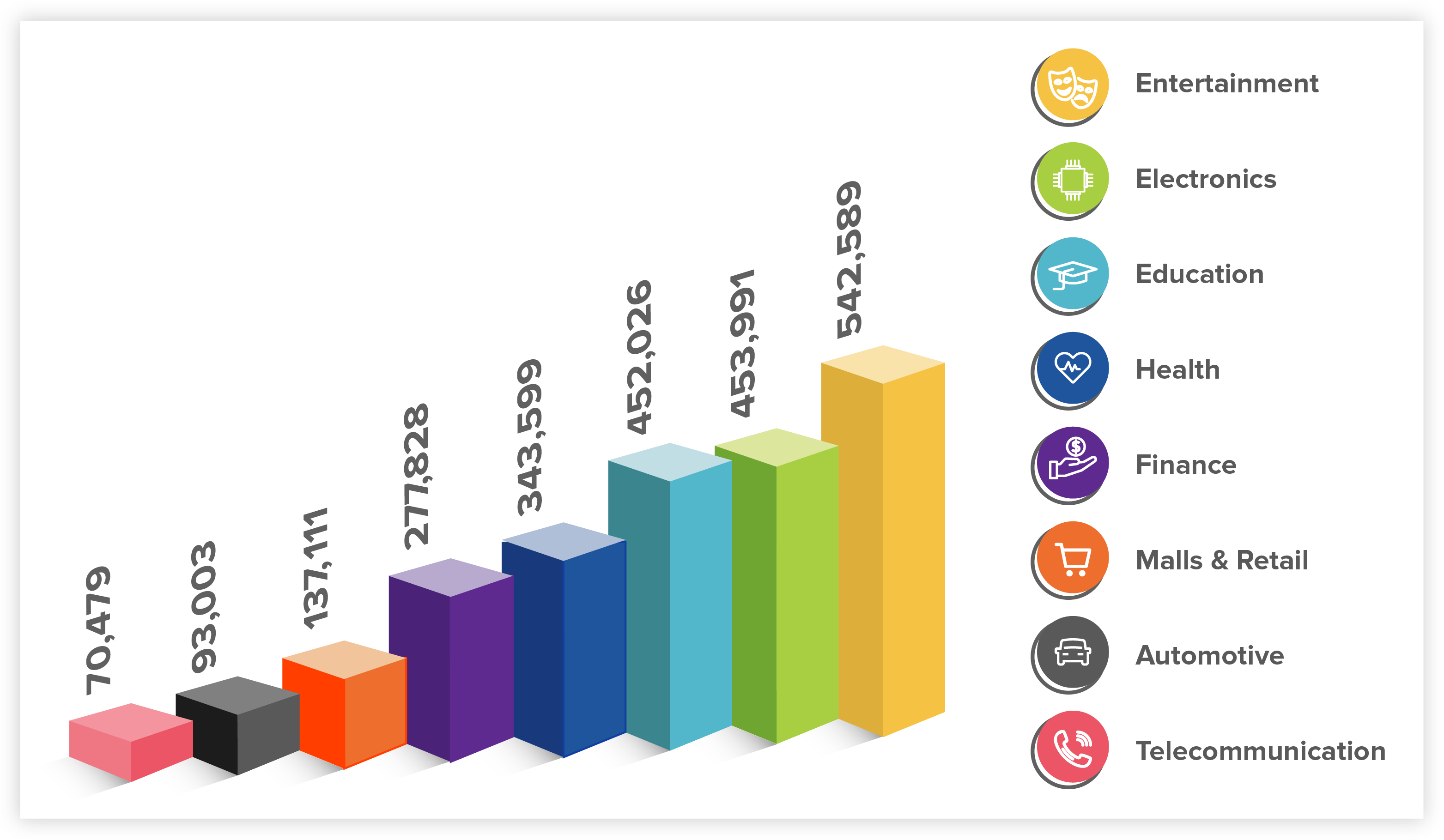 Between 1st to 30th June, the top three most discussed topics were entertainment, electronics, and education, followed by health, finance, malls & retail, automotive, and telecommunication.

June got so many things going! Father’s Day, the longest day of the year, the suffocating weather, oh, what a thrill! As usual, some topics raced to secure a place at the top of the list. So many festivities, new applications, technology features, and of course, new educational news! What’s better than this? We really gotta say, nothing! After observing and listening to the various online conversations up close, we’ve gathered up what’s been taking place in the GCC for the past month. The June 2022 trends and updates are up next!

Starting with the spiciest segment of our Entertainment section: Jeddah Season. So much activity surrounding this now iconic event:

Concerts, exhibitions, celebrations, and much more is happening this summer in KSA! We’ve noticed a lot of buzz with users posting about all the festivities on social media! Elissa, Saad Lamjarred, Magida El Roumi, and Abdelmajid Abdallah all fired up the stage, as part of the event’s concert series. You probably caught a few snippets of those while scrolling on TikTok. There are also plans for an Anime Village where visitors can discover some of the best 50 Japanese Anime shows worldwide. There’s also a three-day K-pop festival taking place very soon!

Now, speaking of K-pop, Suho was a big topic of conversation recently in Dubai, as he launched Festival City Mall’s new Imagine show! Must have been quite the performance given how many mentions we’ve seen pop up after his performance.

Moving on to our next topic: the Queen of England celebrated her Platinum Jubilee, and while everyone in the UK went all-out to celebrate this milestone, the spillover to the rest of the world was also noticeable. But while the Queen was technically the highlight of the celebration, let’s just say that the many faces of Prince Louis stole the queen’s thunder, and reassured mothers everywhere that yes, even the Royal Family is not immune to a toddler’s antics.

Oh and the “will they or won’t they show up” debate was laid to rest, as the Jubilee saw the return of Prince Harry and Meghan Markle to the public eye, but not many people were happy about the return, with a lot of boos coming from the crowds as they were seen leaving the Service of Thanksgiving. Fan favorites Kate Middleton and Prince William, on the other hand, were shown nothing but praise.

The month of June also saw not one, not two, but three celebrations all taking place on the same day: June 21st(which also happens to be the longest day of the year)! Fighting for the limelight were Father’s Day (Middle Eastern Father’s Day, not to be confused with North American or European Father’s Day), International Yoga Day, and World Music Day. Everyone wanted a piece of the Father’s Day cake, with bloggers, influencers, and brands jumping on the occasion whether it be with simple greetings or more elaborate offers. Wellness brands, on the other hand, hopped on the Yoga Day bandwagon, while World Music Day saw its fair share of mentions, mostly by brands that are musically inclined.

Disney made some waves in June for several reasons. First off was the banning of Pixar’s much-anticipated Lightyear movie in several GCC countries because it violates the media content standards by featuring a same-sex kiss between two of the movie’s characters.  But it’s not all bad news for the entertainment giant, as June saw the launch of Disney + in 16 markets across the Middle East and North Africa region. The launch was very well-publicized with a start-studded event at Dubai Opera and generated a lot of buzz in Saudi Arabia, with a lot of people excited about the launch.

And lastly, social media platforms were on fire after the stellar performance of Lebanese dancing group the Mayyas on American’s Got Talent. The dancers received a Golden Buzzer from Sofia Vergara, and everyone (literally, everyone) shared the video on their social media feeds (if you haven’t seen it then we can only presume that you have been hiding under a rock over the last few weeks).

Moving to the next trending topic: Electronics. Some Apple, Huawei, and celebrity news took up the attention of users on social media last month. Here’s a roundup for you:

One of the most awaited events took place last month; the Apple Worldwide Developers Conference, with the hashtag “#WWDC22” trending for a couple of days. Most of the news revolved around the new lock screen customization features, as well as the new Apple Watch features. Changing the font on your lock screen? You got it. The color? You got that too! As expected, Android users had chimed in to remind everyone that Apple is late to the party, but, the grass is always greener on the other side, isn’t it? Also, it looks like Apple Maps will be available in KSA next year!

In with the new, out with the old, right?

June saw us bid goodbye to Internet Explorer, with people around the Internet posting about it, mourning it, and sharing all the things they did on it, like, downloading Google Chrome for example. There was even a tombstone erected in South Korea commemorating the browser with an epitaph: “He was a good tool to download other browsers.”

Microsoft Edge, a newer, faster browser will be replacing it.

It’s not the only thing social media users have mourned in June 2022. Chris Evans has finally gotten rid of his iPhone 6S after seven years. This sparked conversations, mainly on Twitter, about the fact that not everyone cares about having the latest tech and devices in their pockets. That said, congrats Chris Evans on moving on from the dark ages!

And finally, at a recent IP conference held by Huawei titled “Broadening the Innovation Landscape”, they announced a slew of inventions that will revolutionize AI, 5G, and overall user experience. The hashtags, along with #IPMatters, were trending across Twitter.

June is the time for a lot of school-related milestones. First up, those dreaded exams – with exam dates and timings being announced by educational bodies in KSA sparking a lot of chatter.

But June also means it’s the last few days of school, and of course, a time for celebration for a lot of graduating students. Whether they were graduating from kindergarten, high school, or university, those celebrations were trending all over the internet. And it was a refreshing thing to see all those ceremonies after two years of virtual events and paired down graduations caused by the pandemic. Congrats class of 2022, you made it!

The UAE also saw the opening of the Mohammed Bin Rashid Library – with over 1.1 million printed and digital books in Arabic and foreign languages, 35,000 print and digital newspapers from around the world, 500 rare collectibles, and a lot more! There’s no reason why you shouldn’t be reading a lot more this summer!

Rounding up the good news, a young Saudi, Itizaz Al-Nafaei, won second place at the Worldwide Mental Arithmetic Competition. The little girl brought pride to the nation and community and everyone on social media was praising her and cheering for her win.

But June also saw a whole lot of outrage around two horrific murders of female university students in Egypt and Jordan. First, Nayera Ashraf, an Egyptian student, was stabbed repeatedly by a fellow student whose advances she refused. Four days later, a copycat murder took place as another young woman, Iman Irshaid was shot five times by a disgruntled suitor. The killings sparked a debate about the role of social media in spreading information. Was the second killer inspired by the first one? Is posting such events on social media a good thing? Does it spread awareness about longstanding issues, or does it inspire copycat killers? As we mourn these two young women, we can only hope that the discussions have sparked the right conversations about the freedom of choice for women across the region.