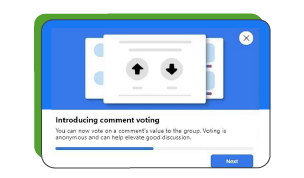 Groups are probably among the best features on Facebook right now (we miss you, Pet Society). Whether about your city, your school, cat photos, public transport memes, or a place where you pretend you are in another time period, Groups are often entertaining and useful.

But, as with every community, there are people with better contributions than others. To make sure that group members are exposed to the more useful, relevant, and impactful contributions, Facebook is working on a feature that will allow users to upvote or downvote comments. The feature would also include special reactions for users to emphasize what made the respective comment valuable, such as “helpful”, “educational”, or “entertaining”, among others.

This system already exists on Reddit (among others), another albeit more niche mainstream platform. There, it works well to showcase the most important or funny contributions. Although there is no release date yet, we expect Facebook’s implementation to bring a lot of value to Groups.