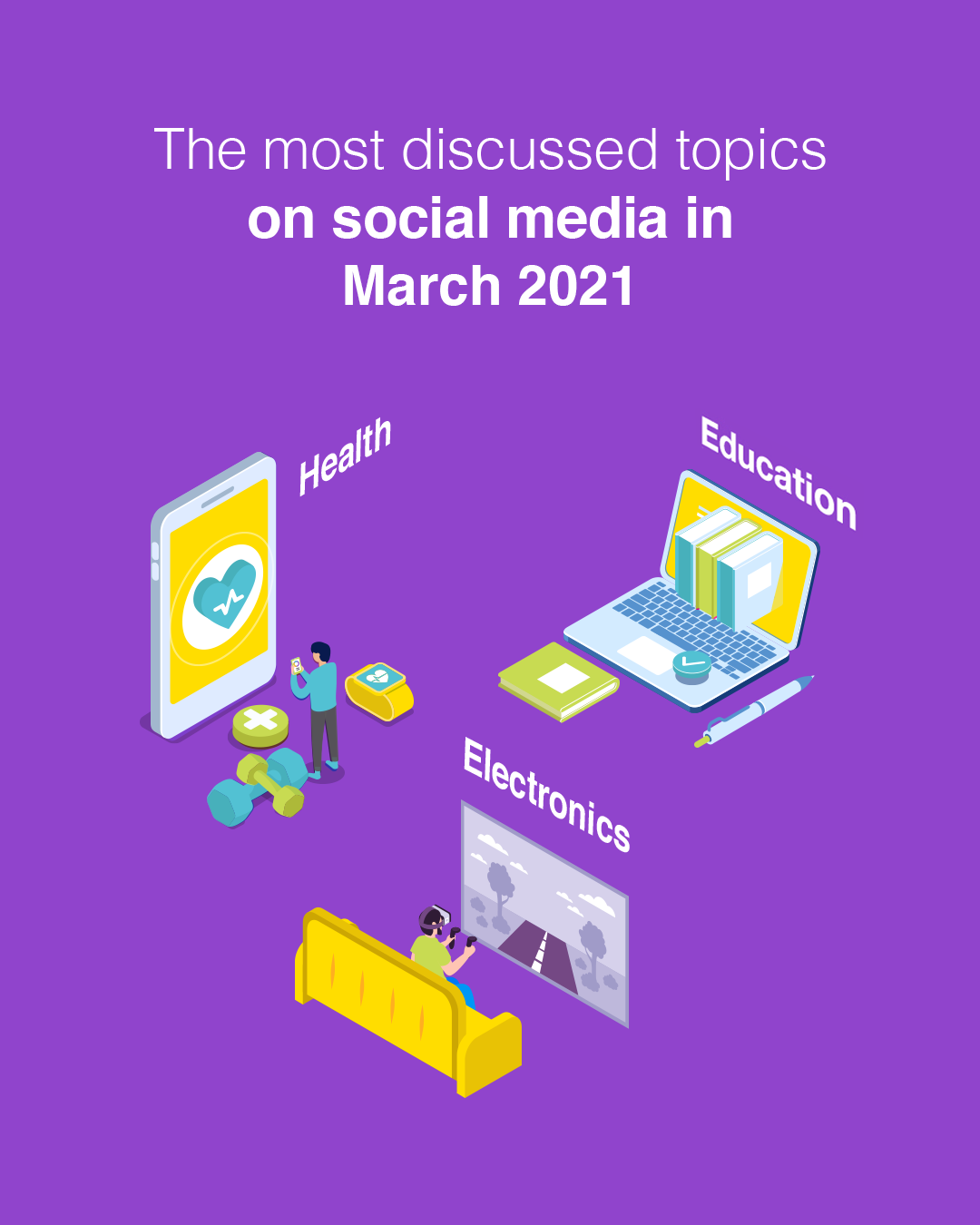 To do so, we’ve have identified a group of keywords in Arabic and English that define conversations according to most relevant industries in the region. We’ve classified them according to the volume of mentions and analyzed the topics of conversation across all social and online media from the GCC between March 1-31, 2021.*

Between March 1-31, 2021, the top three most discussed industries were health, education, and entertainment in that order, followed by electronics, finance, then malls & retail.

Memes galore in March 2021 thanks to a container ship getting stuck in the Suez Canal and disrupting at least 12% of global trade, demonstrating that 2020 might have passed but random world events continue — and most importantly, the people’s capacity for humor rises strong.

Health, Education, and Entertainment are once again the most important themes of conversation for the second month in a row. Notably, March marks only the second time Entertainment has been in the top 3 spots recently, bringing once again lighter topics to the digital sphere already overcharged by heavy social issues.

Health conversations during March continue dealing with the management of the Covid pandemic across the Gulf countries. Compared to February, however, the tone this month is less enthusiastic since most countries are still experiencing continuous cases and social distancing measures.

The spread seems very localized, however, as some countries and cities are affected more than others. Yet, the conversation from the GCC community remains constant: it is everyone’s responsibility to maintain social distancing standards and keep everyone safe.

In addition, and on the occasion of this year’s Mother’s Day and International Women’s Day, users across the Gulf discussed the role of women in general and moms in particular in response to the pandemic, praising their neverending commitment to care and support.

That was not the end, though, as users recognized the health-related issues still prevalent for women in the Arab world as many in the Gulf mourned the passing of influential author and women’s rights advocate Nawal Saadawi in Egypt, a pioneer in shedding light on women’s health issues in the Middle East.

Even though all Gulf nations are doing everything necessary to fight the coronavirus, the pandemic continues to be of unpreceded danger and so most of the educational discussions in the month are around GCC students’ surrendering to the fact that digital and mixed education systems are here to stay.

Most heartbreaking of all, though, is that most likely, a large number of school and universities will have to hold graduation ceremonies online for the second year in a row. Senior students across the Gulf expressed their disappointment that the pandemic is still a reality and because of that, it is better to not risk further exposure, even though that means that their achievements will not be recognized in a traditional fashion.

The ‘Ever Given’ was indisputably the star of the entertainment conversations in March due to the sheer amount of memes and jokes made around the seemingly inconspicuous container ship. Built in Panama but operating for a Taiwanese company, the ‘Ever Given’ is one of the 150 container ships from the Evergreen transportation conglomerate and was also one of the 50 daily ships passing through the Suez Canal… until it blocked it.

Dubbed “the little excavator that could,” the relatively tiny excavator that first responded to the Ever Given emergency, also became an important character in the meme bonanza as it represented the frustration of many in trying to deal with issues that go way beyond individual control. This is probably the first time that a trend-based meme was popular for a considerable period of time, and displaying such impressive versatility — highlighting once again the people’s will to continue pushing through uncertain times with large doses of humor.

International events are also a silver lining this month with the return of Formula 1 for 2021. The first race of the year happened in no other place but Bahrain, one of the most popular modern racetracks alongside the flashy Yas Marina Circuit in Abu Dhabi. This season is also the first one to include Saudi Arabia, which will debut a never-seen-before night street race in Jeddah, rallying many Gulf racing fans for the season.

One of the biggest trends of the month in the Gulf is NFTs, or Non-Fungible Tokens. If you are very confused about what that means, you are not alone. Because, in fact, probably no one really knows — not even those dealing with them!

Similar to the reaction to the GameStop short squeeze back in January (covered here), GCC users were very amused by the seemingly non-sensical ways of the digital markets. And no one can blame them: NFTs are, in their most basic sense, a sort of “certificates of ownership” of digital goods like an image or a song. But no, you will not be owning the copyright to distribute it commercially but rather you just will be “owning” a specific “sample” of that good.

Yes, it means that if you buy a NFT of a song, you will not really own it since anyone can listen to it, but you will have a pretty digital certificate that confirms that you do own it. For now, NFT trading is the newest and shiniest millionaire hobby, but as this month attested, it will be a mainstay in technology conversations in the Gulf and the world.

If you are still interested in NFTs, and many enthusiasts in the GCC are, then you might want to know that Nyan Cat, the GIF of a pixelated cat traversing the sky and leaving a rainbow behind, was sold for the crypto equivalent of $639,000. Is the GIF out of circulation? No, you can use it freely as any other. Our favorite example is Jack Dorsey, CEO of Twitter, selling his famous first tweet that says “just setting up my twttr” for $2.9 million. Does that mean that the tweet is now only accessible by the new owner? Not at all. In fact, here it is.

The NFT conversation is amplified by its close links to cryptocurrency markets and to the one and only Elon Musk, the self-proclaimed “Technoking of Tesla” (which is his actual title) and his global following on social media. Musk was also in the spotlight this month not only because of his usual Twitter shenanigans, but also because of his decision to allow the purchase of Tesla automobiles with Bitcoin, the most popular cryptocurrency around. Users across the Gulf had mixed emotions since Tesla is only available in the UAE; nevertheless, tech enthusiasts welcomed the decisions since it bridges the “regular” economy with the “digital” crypto economy. Will we see a more prominent role of cryptocurrencies in the mainstream economy?