Social space: A roundup of all the GCC social media news in October 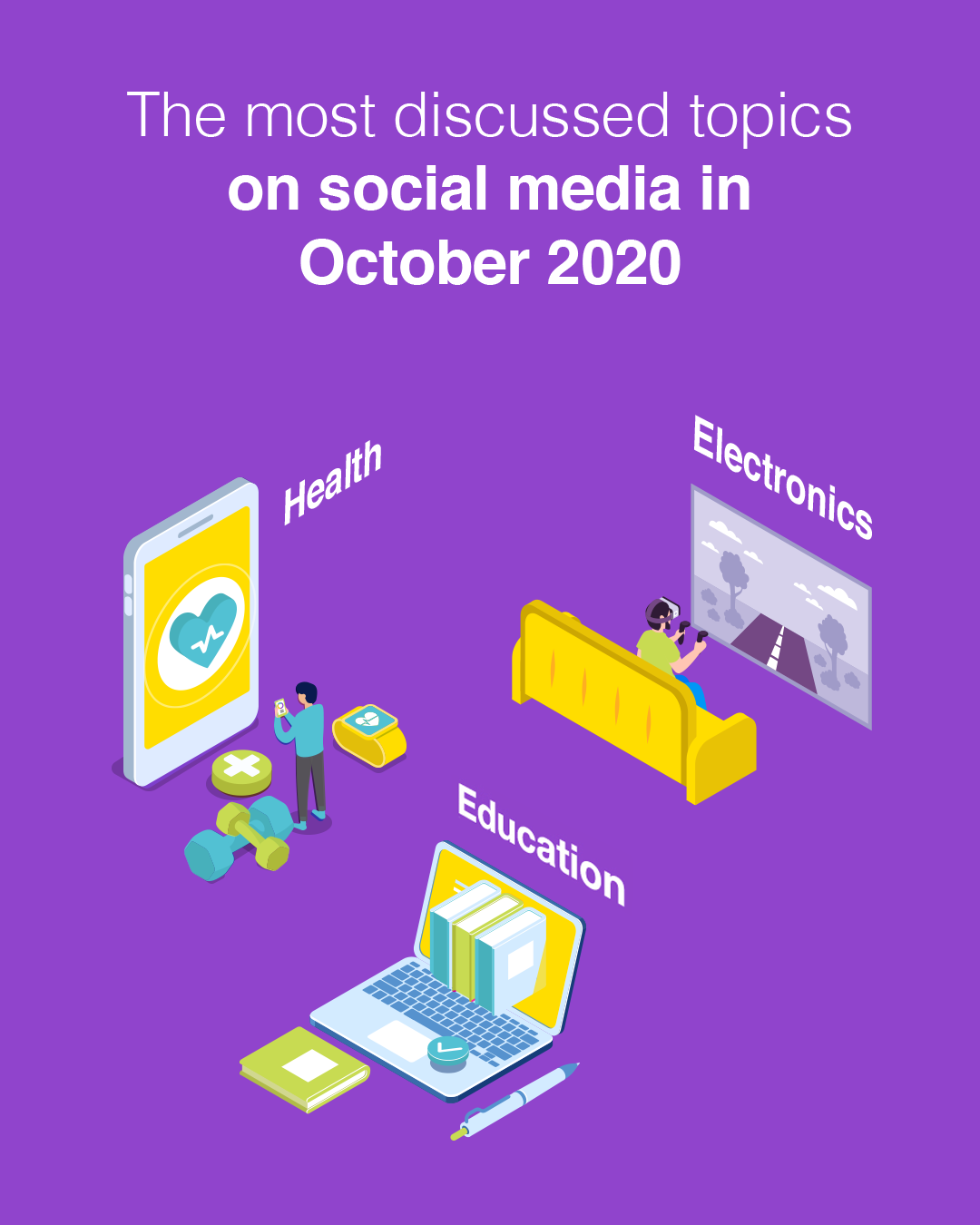 The top three most discussed topics were electronics, education, and health in that order followed by entertainment, malls & retail, then automotive.

The most important electronics discussions this month were monopolized by Apple’s controversial decisions surrounding the release of the iPhone 12.

Apple’s newest flagship device marks a return of the iconic form factor resembling the squarish sides prominent in iPhone design from 2010 to 2014. Users regarded the wider range of choice in this year’s iPhone line favorably, as Apple released four different models: a mini model, a standard 12, a Pro version, and a Pro Max with the biggest screen ever in an iPhone.

However, aside from the attention given to the top-of-the-line specs and material, users across the GCC took issue with Apple’s allegedly eco-friendly decision to not include a wall charger with the newest iPhone. Many claimed that is just a brazen money-grabbing move from the Cupertino company to flex its extensive brand following to cut costs but not reducing prices, therefore placing the burden of the decision on the customer.

Users also questioned the effectivity of such a move for the benefit of the environment; many customers complain that since the longevity of Apple chargers is minimal, they would have to then buy a new charger anyway regardless if they owned one before.

Continuing a line of criticism, albeit with a lighter note, users questioned the usefulness of the inclusion of 5G in the iPhone 12 line. Claiming that the technology is not currently accessible for all in the GCC, many dismissed Apple’s claims of the revolutionary speeds the telecommunications technology purportedly bring. In fact, a viral video circulated in the Gulf mocking the numerous times ‘5G’ was uttered in the iPhone 12 presentation video.

Educational discussions continue to revolve around the challenges and obstacles of operating schools during a pandemic.

Despite the continued efforts by national authorities in the GCC, students and teachers alike still struggle with the hurdles of online and hybrid education systems. From burnout and screen fatigue to risk of contagion and social anxiety, the pandemic has not only aggravated existing mental health difficulties but has also added new challenges to solve

Individual countries are facing their own obstacles, too. Users in Saudi Arabia, for instance, launched a hashtag to suggest to the education authorities to allow remote testing for students with special needs. Omani users are expecting a hybrid schooling system to be finally rolled out on the first day of November.

Health conversations are still about the latest developments in the fight against the coronavirus in the Gulf.

At the forefront of vaccine development, the United Arab Emirates announced the successful completion of phase III of the Chinese COVID-19 vaccine in partnership with Sinopharm’s China National Biotec Group.

In addition, users expressed their gratitude and praise to the health authorities for their work as they also announced their partnership with the Gamaleya Research Institute in Moscow, the developers of the Russian COVID-19 vaccine. The UAE will be testing ground for phase III of the ‘Sputnik V’ trials, and there seems to be a lot of support based on public opinion.

The arrival of autumn’s cold weather, however, did not bring many positive sentiments this year. Users all over the Gulf expressed their worry that colder temperatures usually usher the advent of flu season, which, in combination with the pandemic, might exacerbate the difficult conditions already present for public health.

France was at the center of the intersection between malls, retail, and politics in October following President Macron’s comments after a terrorist attack in the French city of Nice.

All over the Gulf, both citizens and residents called to boycott French products and companies. A large number of users showed their commitment against French products from brands like Cartier and Dior to Renault and Tefal through viral hashtags as well as influencer actions. Supermarkets joined the initiative, too, as many users showed empty shelves after French products were removed.

We have identified a group of keywords in Arabic and English that define each of the pillars highlighted above. We then conducted a social listening exercise for these keywords across all social and online media from the GCC between October 1-31, 2020. We then calculated the volume of mentions for each pillar, and analyzed them to highlight the most popular topics under each pillar.