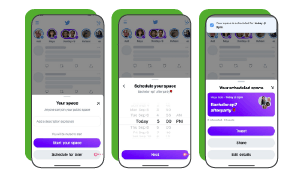 It’s been nearly a year since Clubhouse erupted into the high-profile social media sphere, making voice-only formats trendy. It also took that year for audiences in the Middle East to get hyped around it and for it to become the hottest platform. Meanwhile, social media giant Twitter has not stopped its development of Spaces, its own audio-only feature, in the hopes that it can successfully hijack the format from Clubhouse.

To do so, Twitter is reportedly testing new privacy and scheduling features. The first one is the option to allow hosts to limit the audience of the space they are creating—thereby creating private rooms. The second one, a scheduling tool, functions like events, with hosts scheduling their spaces and being able to promote them via tweets. In turn, users can sign up for reminders for the scheduled space.

In a probably bigger blow to Clubhouse, which does not currently have an Android app, Twitter has also announced that Spaces is finally here for Google’s OS in beta. Will Android users make the difference Twitter is waiting for?

Last year, we had Instagram trying to take on TikTok’s short videos with Reels. So far TikTok still has the upper hand. But in this year’s cloning deathmatch, will considerably smaller Clubhouse survive the attacks of titan Twitter?

Stay tuned to find out!