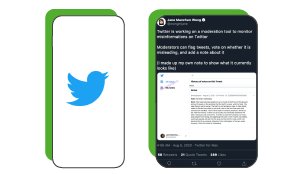 If you have been on Twitter, or any social network for that matter, you probably have experienced misinformation campaigns at work. From elaborate foreign efforts, such as Russian or Chinese bot campaigns against Joe Biden, to casual fake news, like your uncle sharing the news that the COVID vaccine has been found but Bill Gates wants to keep it for profit.

But the US presidential election is coming and chaos is likely to ensue if misinformation is left unchecked. For this reason, Twitter is reportedly developing a new method of tackling fake news called ‘Birdwatch’. The early sightings of ‘Birdwatch’ show what it looks like a crowdsourcing tool through which users can easily flag a potentially misleading tweet and fill a form indicating what falsehoods it contains.

Users will also have a special ‘Birdwatch’ collection, gathering the tweets they flagged alongside the extra information they have submitted about them. Twitter internal moderators also seem to be able to add notes to flagged tweets and vote whether to label those tweets as misinformation.

Given the difficulties of weeding out fake news from social platforms, do you think crowdsourcing moderation is a safe alternative?