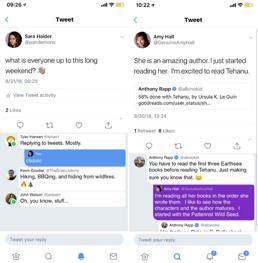 Twitter is experimenting with a couple of new variations for tweet interaction in an effort to boost engagement.

As shown in the image above, Twitter has a new layout mock-up in place, which includes the following changes:

These changes are not final, Twitter’s official is asking users for suggestions to make the new layout more conversational.