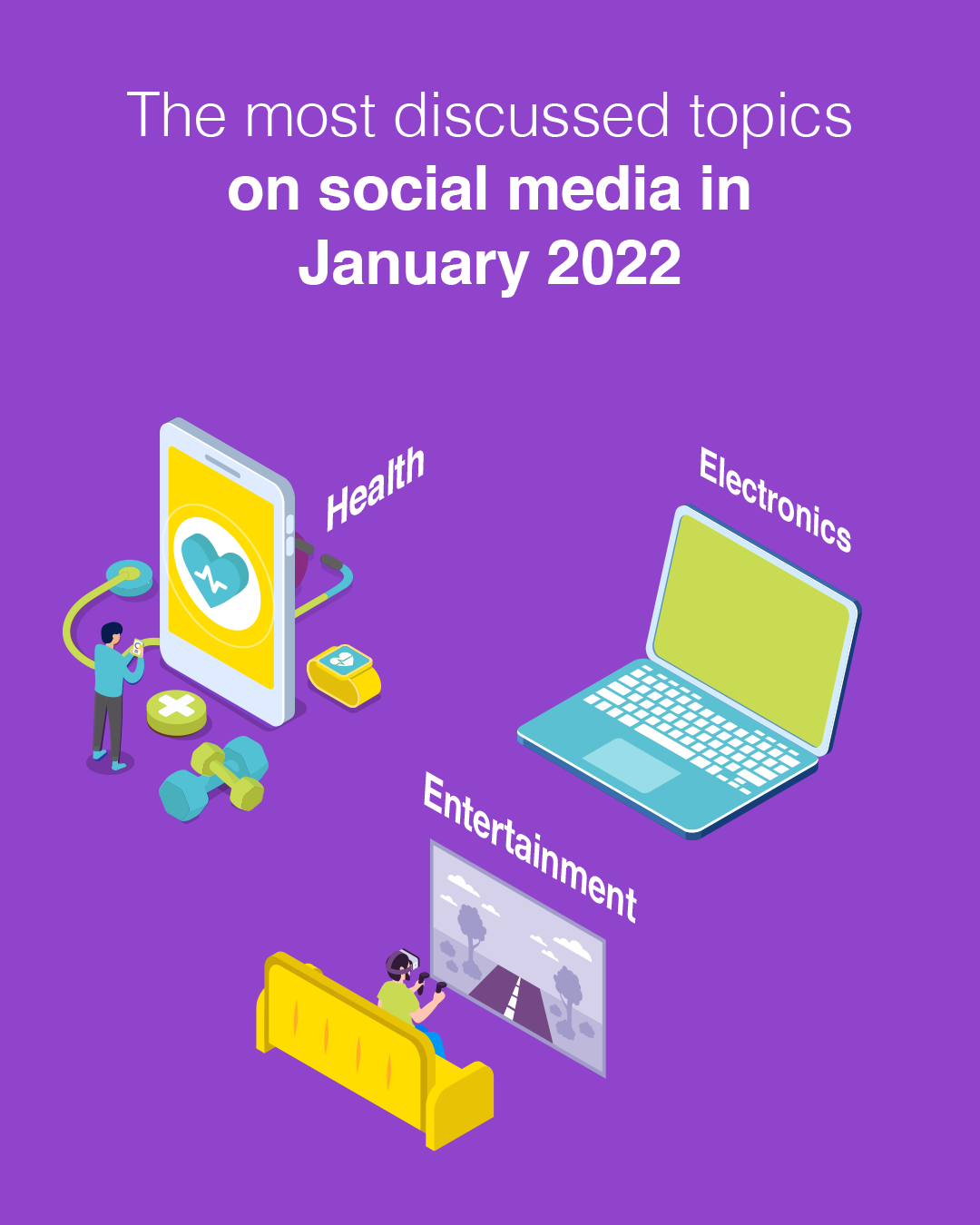 To do so, we’ve have identified a group of keywords in Arabic and English that define conversations according to most relevant industries in the region. We’ve classified them according to the volume of mentions and analyzed the topics of conversation across all social and online media from the GCC between January 1-31, 2022.*

The top three most discussed topics were electronics, entertainment, and health, in that order, followed by education, finance, and automotive.

The new year is here, and at least according to the social media activity in the Gulf, nothing much has changed. Measures to manage the pandemic, as well as COVID-related news, continue to dominate the everyday conversation while popular culture & media provide most of the entertainment. With Expo 2020 racing through its final stint, it is Qatar’s turn to keep the spotlight on the region with its highly anticipated 2022 FIFA World Cup finally happening late this year.

Zooming in to January’s conversations, we saw that for the first time since last September, Electronics conversations emerge as the top in the region, due to discussions around new gadgets and store giveaways. Entertainment conversations ranked second, from international sports events, regional celebrations, and media. Finally, Health conversations come in third, as the Gulf countries deal with the Omicron variant as well as a vaccination discussion prompted by tennis superstar Novak Djokovic.

A plethora of tech giveaways from retailers and websites to celebrate the new year overwhelmingly dominated the electronics conversations in the first month of 2022. From true wireless earbuds to smart TV accessories and even the latest iPhones, brands and stores around the region made sure to celebrate with their userbase regardless of their budget.

But it was the new products coming directly from the CES 2022 that captured the more meaningful discussions from regional tech enthusiasts. Even though most of the biggest high-profile companies decided to have their appearances virtual-only, the Consumer Electronics Show went on, presenting the most cutting-edge technology from mainstream brands.

As is tradition, a large portion of the products showcased are never mass-produced for consumption and instead serve only as prototypes to display the state of the industry. However, companies do announce real products during the event. Intel’s new Alder Lake processor family was probably the most anticipated by Gulf users since it is Intel’s response to Apple’s Pro version of their M1 chips.

Even though the 12th generation of Intel processors cannot match Apple’s battery efficiency, they do show to be able to compete in terms of performance. PC fans in the GCC touted the announcement with excitement, hoping Intel will continue to deliver and innovate now that they are competing not only with Apple’s proprietary silicon but also with AMD, for the future of the PC.

Gulf gaming enthusiasts joined the conversation, sharing their delight in the gaming possibilities of the new Intel processors. Notwithstanding, gamers also shared their concern for their gaming ecosystem as the news broke of big corporations taking over videogame companies: Microsoft acquiring Activision Blizzard and Sony doing the same with Bungie. Many users warned that despite a potential increment in the gaming development budget, fewer independent studios could represent a threat to innovation and creativity.

International football tournaments were once again the main driver of entertainment conversations in the Gulf. With the FIFA Arab Cup’s finale in Qatar last month, now all the attention was drawn to Cameroon for the 2021 Africa Cup of Nations, where the national teams from all countries in the continent clashed for regional glory. As opposed to the Arab Cup, for which North African countries did not include players from European leagues, the Africa Cup teams boasted the best football players the continent has in its ranks.

Despite that, no Gulf nations are competing in this tournament, the action that kicked off in Yaoundé was followed by many users in the Gulf since the home countries of many from the international community of the region were participating. Residents from Sudan, Morocco, Algeria, Tunisia, Ethiopia, Kenya, Nigeria, and Ghana cheered for their national teams as they vied for the trophy. But the loudest community, at least on social media, was that from Egypt, which placed all their hopes in the left foot of their captain, Mohammed Salah, who led his team all the way to the semi-finals as of the month-end.

Aside from sports, media also played a prominent role in January’s conversations. After the roaring success of the latest Spider-Man movie, the hype from Gulf users is now with Marvel’s Moon Knight, the American comic giant’s upcoming TV series. Starring acclaimed actor Oscar Isaac, the show will contain heavy depictions of Ancient Egyptian mythology and imagery, as the main character harnesses his powers from the moon god Khonsu—while in real life is also led by Egyptian director Mohammed Diab.

Not all media conversations in January were positive, however, as the release of Netflix’s first Arabic film ‘Perfect Strangers’ attested. A milestone for the region’s film industry, the film featured a star-studded cast, including Lebanon’s Nadine Labaki, Egypt’s Mona Zaki, Jordan’s Eyad Nassar, among others. Despite topping the most-viewed charts across the Arab World, the film’s attention was mired by viral polemic due to the controversial depiction of one of the main characters. Gulf users joined the polarizing conversation, as some agreed with the Egyptian media that it undermined traditional values, while others preferred to highlight instead the acting and production value.

Unsurprisingly, the public health situation surrounding a spike in Covid cases due to the Omicron variant represent the bulk of the health conversations in January. While reports varied about the severity of those infected with Omicron, since many users reported considerably milder symptoms compared to other variants, most Gulf countries saw spikes that rivalled those from the very first wave of the pandemic in 2020. Indeed, the Omicron variant puzzled Gulf users as it infected very rapidly those who were vaccinated and even those who had recovered.

But the story that monopolized the health conversations in the Gulf during the first month of the new year had to do with no other than Serbian tennis star Novak Djokovic. Despite the trove of scientific evidence showing their benefits, Djokovic has never given any public support to Covid vaccines. Going against the advice of all the most important health organizations in the world and most if not all pro athletes, Djokovic decided to still not get vaccinated. Which could be argued is a personal decision—if he wanted to stay isolated at home forever.

Unfortunately for him, and for all anti-vaxxers in general, we live in a society that has measures in place to protect the health of literally everyone else when a member purposedly engages in dangerous behaviors. And this is precisely what Australia’s Immigration Minister used as the argument to cancel Djokovic’s visa to enter the country and participate in the Australian Open, the first Grand Slam of the year. Fortunately, many Gulf users agreed with the decision, slamming the Serbian player for his reckless activities.