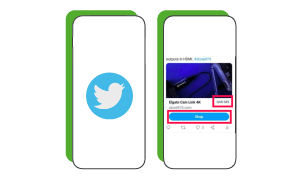 After years of Facebook & Instagram investment in eCommerce features, it seems like Twitter has finally awoken from its slumber. Last week, analysts have reported the appearance of several features that point at a new effort from Twitter to incorporate business and eCommerce tools to the platform.

The first one is shopping cards. According to reports, Twitter has updated its regular website cards and has made ones specifically to advertise products. The new cards include not only the store and product name, but also the price and most importantly a clear ‘Shop’ button.

The second update has to do with upcoming business accounts. The platform had done a comparatively good job in highlighting accounts belonging to governments and other parties of interest to society, but it had lagged behind when it came to business. It seems like it won’t be case anymore.

Previews of the new business accounts show a new design alongside a custom module which could include:

eCommerce on Twitter does not really feel natural, mostly because other platforms had more dedicated tools to it, but this could change if these new features work out. We are excited!