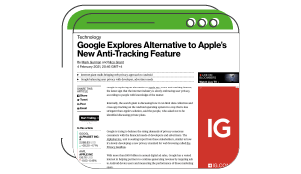 You’ve most probably heard about Apple’s upcoming IDFA change, which wasn’t welcome news for social media giants such as Facebook and Snapchat. How could it be anyway given the drastic impact it will have on their advertising platforms?

With the Apple’s new anti-tracking feature soon becoming reality, Google has also started to take vital steps, although less strict than Apple, to limit app data tracking and embrace users’ privacy. As such, Android users might soon be able to opt out of app data tracking.

“Internally, the search giant is discussing how it can limit data collection and cross-app tracking on the Android operating system in a way that is less stringent than Apple’s solution. Google is trying to balance the rising demands of privacy-conscious consumers with the financial needs of developers and advertisers. The Alphabet Inc. unit is seeking input from these stakeholders, similar to how it’s slowly developing a new privacy standard for web browsing called the Privacy Sandbox.”

We are yet to see how all this turns out; however, all these changes signal towards a growing industry trend of a more transparent approach when it comes to data tracking.