Snapchat to make you reflect on the meaning of friendship 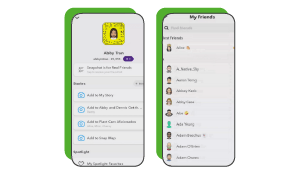 If you had a Facebook account around the year 2010, then you probably still have the most random collection of people on your friend list. Back in the day we used to add literally anyone—friends, family, colleagues, classmates, acquaintances, distant relatives you had never met, and even unknown people who commented on your favorite artist’s fan page (we did, at least). The team over at Snapchat knows how this works and wants to make sure that you only have real friends in their platform.

Just last week, Snapchat began rolling ‘Friend Check Up’, a new feature that encourages users to review their friend list and facilitates the deletion of people you’ve never met or just don’t talk to anymore. According to the platform, and as reported by Mashable, Snapchat thinks that:

“One source of risk on digital platforms are the connections that can be created — sometimes at the explicit urging of the platform — with people who we don’t know in real life and who may expose us to negative experiences,” a Snap spokesperson said via email. “The architecture of our platform is designed to encourage connection and communication between those who are real friends, while making it much harder for strangers to find and friend Snapchatters.”