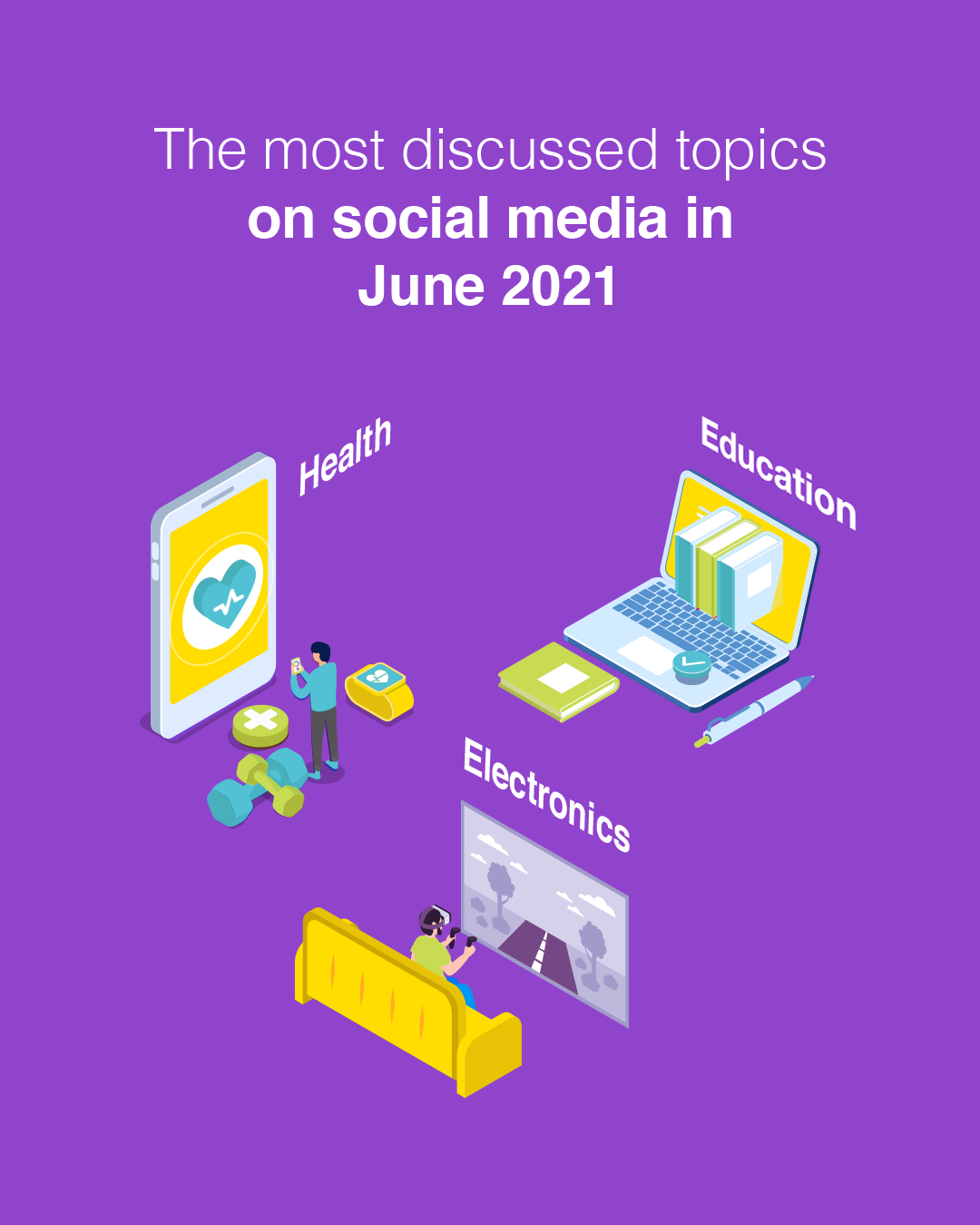 To do so, we’ve have identified a group of keywords in Arabic and English that define conversations according to most relevant industries in the region. We’ve classified them according to the volume of mentions and analyzed the topics of conversation across all social and online media from the GCC between June 1-30, 2021.*

Between May 1-30, 2021, the top three most discussed topics were health, education, and entertainment in that order, followed by electronics, finance, and malls & retail.

Health, education, and entertainment remain the top 3 drivers of conversation for the second month in a row. Having health and education conversations in the top spots is now expected, given the way the pandemic is unfolding and how nations around the world continue adapting to the changing circumstances.

Entertainment, however, keeps the spot mostly due to the action-packed summer catalog of sports competitions and media releases – probably the first time since the past year that popular events are making the community feel a sliver of normalcy. As football tournaments continue and the iconic Summer Olympics start, we expect entertainment conversation to remain relevant in July, too.

The important progress achieved by Gulf nations in their vaccination campaigns as well as the threat of Covid’s Delta variant were polar opposites in the health conversations during June. Whereas most GCC countries continue lifting the restrictions of their most recent lockdowns, uneasiness advances from the affected South Asian neighbors that are experiencing a deadly wave of the highly contagious strain.

Notably angering many in the Gulf community, travel restrictions and suspensions to and from countries like India, Pakistan, and Bangladesh were just the beginning, with more countries being added as a precautionary measure. Confidence still runs high though, as the current vaccines have proven so far to provide robust protection against the more infectious Delta variant.

This has allowed for Gulf authorities to manage to ease more and more social distancing policies – reflected in a much more positive outlook from the Gulf community. Also noteworthy has been the positive reaction to the UAE first and Bahrain second authorizing children aged 12 to 17 to take the vaccine jabs, making them the first GCC countries to do so and strengthening their community’s immunization.

The Euro 2020 was also an unexpected driver for health discussions this month. First was the sudden collapse of Danish player Christian Eriksen during their group stage match against Finland. When the football star suffered a cardiac arrest, his teammates rushed to his side and formed a barrier to shield him from cameras while doctors struggled to save his life. This act of solidarity was praised by many in the Gulf community, starting a conversation about journalistic ethics as many media outlets often show graphic imagery for the sake of views without respect for those depicted.

Second was a viral video from Portuguese superstar Cristiano Ronaldo, in which he confidently removed two Coca-Cola bottles from their prime sponsorship position at the front of the press conference desk. “Drink water” was Ronaldo’s advice as he replaced the maligned soda with a water bottle, prompting impassioned discussions about the health effects of Coca-Cola and other sodas. The conversation quickly evolved into the role of not only carbonated drinks but also the general damaging influence of sugar in the diets of Gulf users.

Continuous protests against in-person examinations were the main drivers of the educational conversations in June. This time, however, the discontent came from the expatriate communities across the Gulf nations, especially the ones whose homelands are currently affected by the contagious effects of the Delta variant.

Most particularly, the biggest movements are centered around the situation in Pakistan, calling for the elimination of in-person examinations and the outright dismissal of the federal education minister. While students marched and protested on the streets and outside of governmental buildings in Pakistan, the Pakistani community in the Gulf took the matter online and continued to heavily campaign with the hashtag #CancelExamsSaveLives.

The enthralling matches of the Euro 2020 (in 2021) were the focal point of the entertainment conversations in June, marking the second month in a row that the beautiful game dominates the social media space in the Gulf region. The surprise early elimination of Cristiano Ronaldo’s Portugal and Kylian Mbappé’s France in the first knock-out stage made the headlines; yet, it was the cheer supporting England’s national team that united the anglophone social space, and the Gulf expatriate community was no exception.

Marvel’s prowess is no longer limited to cinema as their productions are taking a hold on the small screen, too. Starring in the third of the slate of this year’s limited series, Tom Hiddleston immediately captivated the hearts and minds of Gulf fans – mirroring the skills of the titular character he plays in ‘Loki’. The Asgardian God of Mischief quickly became a favorite, as many GCC netizens promptly joined the pleas for the renewal of the show for a second season.

Rocking the pop world, Britney Spears took the Internet by surprise with her polemic declarations against her abusive conservatorship. Gulf users joined the call to #FreeBritney and allowing her to end the legal relationship with her parents. The Princess of Pop’s plight also prompted a wider conversation around issues related to fame and mental health, highlighting that not everything we see on social media is an accurate reflection of reality.

The summer hasn’t even ended and yet the two personal computer giants have dropped significant updates to their operating systems. The first one was Apple, announcing Mac OS 12 Monterey, the next version of its OS that, while it keeps the visual language of its predecessor, will add a wide variety of features for those already invested in the Apple ecosystem.

Indeed, this update focuses on ‘continuity,’ that is, the development of strong and versatile services and apps that work across all Apple devices. Tech enthusiasts across the Gulf joined the hype when it was announced (during the presentation) that the new OS would allow users to use the cursor of your MacBook to control your iMac and iPad without any extra steps.

Microsoft did not wait around for long, however, as the Redmond giant released Windows 11 at the end of the month. Unlike Mac OS Monterey, the newest Windows OS does bring major visual changes, including a redesigned Start menu and dark mode. Interestingly though, shortly after the announcement, Microsoft got into a bit of a problem as the minimum requirements to run it were exceedingly high, leaving out many modern devices.

Global tech experts and Gulf enthusiasts called into question the rationale of the restrictions, pointing out that Apple’s latest update would be supported by desktops as old as eight years old and laptops as old as six years old. In contrast, Windows 11 could leave powerhouses like the 2018 Surface Studio, an iconic pro device announced with much fanfare, without the update. Since the minimum requirements are tied with the processor’s specifications, has Apple just showed that making their own silicon was the right move after all?