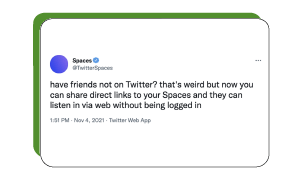 With numerous platforms focusing on expanding their audio content, Twitter took an extra step and added an additional feature that allows non-Twitter users to tune in to Spaces broadcasts. Users can now promote their Spaces anywhere and not have to worry about who can join.

The update comes alongside a rollout of features related to Spaces, such as a dedicated spaces tab, topics for Spaces, Spaces recordings, and highlights of trending Spaces. Such features are expected to increase Spaces’ usage as it becomes easier for users to find and tune in to their desired broadcasts and topics of interest.

The new non-users feature will be very useful to creators and brands who utilize the Spaces feature, as they can now share their broadcast links on other platforms where anyone will be able to join. This feature can also potentially increase traffic on the app, as users who would like to participate will have to create Twitter accounts.