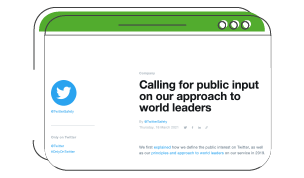 Since last year, Twitter took a lot of drastic and controversial decisions regarding dubious and plain hateful speech from world leaders (ehem, Trump, ehem). From labelling tweets containing misinformation more decisively to outright banning accounts, the platform’s measures have been at the center of discussions surrounding speech rules in the digital sphere.

Starting March 19th, Twitter has started calling for responses to a public survey, which will be available in 14 languages including Arabic, that will help inform the continuous development of the policy framework regarding these speech rules. More importantly, if this survey actually carries enough weight to influence policy, then we are looking at a very interesting exercise of public legitimation.

Similar to a political referendum, the platform could be seeking to attain popular legitimacy for their actions or give away the burden of inaction to its users around:

This means that if users in the survey agree with Twitter taking strong actions, the platform can defend itself from criticism by claiming public legitimacy. Similarly, if it happens the other way around, they can argue that it was the public who chose for them to not take meaningful action.

Again, it all depends on the size of this survey’s role in creating policy, but if it is actually important, this could be a very interesting exercise to pay careful attention to!