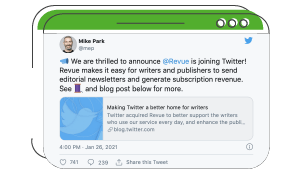 Last year was very special for journalism and blogging, which experienced a very interesting format transformation. Yes, newspapers and magazines and news sites are still alive and probably will still be, but most of 2020 saw the boom of the newsletter as a viable alternative to traditional outlets for many writers. Substack was arguably the biggest winner, becoming the platform of choice for writers to monetize their work independently.

In line with this trend and in a bid to continue appealing to writers and academics, Twitter has announced the acquisition of Revue, one of the most popular newsletter platforms. Although not quite ranked #1, Revue’s service robustness will be a particularly strong asset for the social media giant.

According to Twitter, the goal of the acquisition is for writers to:

“Connect with their subscribers, while also helping readers better discover writers and their content. We’re imagining a lot of ways to do this, from allowing people to sign up for newsletters from their favorite follows on Twitter, to new settings for writers to host conversations with their subscribers. It will all work seamlessly within Twitter.”

And on the monetization front:

“And for those looking to generate revenue, we’re creating a durable incentive model through paid newsletters. Bringing Revue to Twitter will supercharge this offering, helping writers grow their paid subscribers while also incentivizing them to produce engaging and relevant content that drives conversations on Twitter.”